The Dangers and Better Alternatives to Shed Antler Traps

Each and every shed hunting season, many die-hard hunters dedicate a lot of their spare time (including week nights, weekends, and even lunch breaks) to traveling the woods and looking for shed antlers. You’re probably one of them! While shed hunting, walking mile after mile is extremely satisfying and acceptable to simply find just one shed antler. However, in the pursuit of making the process a little easier and more consistent, some folks like to employ shed antler traps on their hunting properties. It seems harmless enough, doesn’t it? It’s supposed to only knock something off that would fall off anyway, right? An antler rack trap can definitely pile up more antlers than just walking through the woods alone. But there’s a dark side to deer antler traps that most people do not realize. If you currently use shed antler traps or are thinking about using them this year, you need to read on below. Why Are Shed Antler Traps Used?

There’s a simple reason people like to use shed antler traps, especially around supplemental feeders: they work. In fact, that combination can be a dynamite shed antler producer. The feeder pulls them in to eat very regularly each evening. The more time they spend there, the more likely they are to drop an antler. But here is where most shed hunters get confused. The reason antlers might lay in abundance around an antler trap is not due to the antler trap design or construction…it’s simply because they were ready to drop and happened to be feeding on the bait when the antler was ready to fall.

While there are plenty of sturdy metal versions you can buy today, a common homemade antler trap involves setting fence posts or cattle panels closely around a feeder so deer have to stick their heads into the area to feed. They may bump them while eating, but they aren’t very likely to knock their antlers off, the reason why will be explained later. For now the take home point should be that antler traps obviously make it easier for a person to find shed antlers, as seeing that they usually involve a hundred pounds or so of deer feed and deer corn. With deer spending time feeding, the likelihood of finding a deer shed skyrockets…and since you have to refill the feeder every week or so anyway, you can simply pick up any antlers sitting around the vicinity! Since feeders are often located in areas where you could simply drive your Bad Boy Buggies® ATV or side by side up to, this is infinitely easier than walking miles of hills in the snowy terrain. It’s easy to see why people might be drawn to an antler trap feeder.

Bedding and feeding areas are the two best places to find shed antlers because that’s where whitetails spend most of their days and nights, respectively. They also might lose them along travel corridors between these two areas. But due to probability alone, they are just most likely to be in one of those two areas when their bodies finally reach the hormonal threshold to shed their antlers. As they move around within their bedding area during the day, they may also bump their antlers against brush or the ground to jar them loose. Similarly, feeding deer are likely to bump their heads against the same things as they eat throughout the night. However, they generally will not hit them hard enough against these objects to break them loose before they are ready. What do we mean by “ready” and how do deer shed antlers anyway? The Science behind Antler Casting

Bucks have two pedicles on their skull – think of them like the bases or seeds that grow a new antler each year. When whitetails eat your nutritious food plots and consume those wonderful minerals you place at mineral sites, their antlers grow and harden throughout the summer. But as winter wears on, their changing hormones as a result of photoperiod cues start to trigger the buck’s pedicles to dissolve minerals along what’s called the abscission line. As their bodies re-absorb the minerals, this layer weakens and becomes a little crumbly – this forms the roughly spherical base you find at the ends of your shed antlers.

If a buck gets his antlers struck or lodged in something too hard before this abscission line has dissolved completely the minerals (as they can do on the market’s many metal-constructed shed antler traps), it can cause a portion of the pedicle (i.e., a part of the deer’s skull) to break loose with the antler! And yes, breaking off a piece of their skull is basically as bad as you think it sounds. This can create grossly deformed antlers for the rest of its life, and that is the best case scenario; the worst is that an infection takes over their brain and kills them slowly. So sure, you might find more sheds this winter by using shed antler traps, but you could also find a sad-looking buck carcass this summer in return. We’re guessing you don’t want that since you’re probably interested in seeing and hunting those hit-list bucks again next fall. In the end, the risks of using a shed antler trap are just not worth the potential rewards. Luckily, there are safer alternatives to help you find as many sheds as possible this winter without the risks. These also bring several other advantages beyond the trophy of the antler. Let’s look at a few options.

By choosing to shed hunt the old fashioned way and not using an antler trap you expose yourself to looking into different options and tactics. These tactics that go along with shed hunting season paint a more complete picture in regards to your hunting strategy.

Using a supplemental feeder (without an antler trap) is a solid start to draw deer in and increase their chance of being there while they drop antlers. But there are some caveats. Feeding deer may be illegal where you hunt, so check your local wildlife regulations before you start. If deer in your area are unaccustomed to eating highly nutritious Big & J® attractants or even cracked deer corn, you’ll need to start them on it slowly. If you don’t, deer that are primarily adapted for surviving on winter woody browse could starve themselves by eating it. Their guts just won’t have all the microorganisms they need to properly extract all the nutrients they need, so it will essentially pass right through them without nourishing them. Start by introducing just 10 pounds a week or so and steadily increase the amount you give them each week. This should give them time to adapt to the new food source and survive.

While you’re feeding them this way, the idea is to not only get them accustomed to the site but also to get them in front of a camera! By running a trail camera survey immediately after the hunting season you not only figure out which bucks are still around  but also when bucks are shedding not to mention a spreadsheet of information on your property’s  deer population! This can help inform future management decisions by letting you know the deer population number, age, and structure, but it will also let you watch as bucks feed to see whether they have dropped their antlers or not. Bushnell® wireless trail cameras will allow you to keep an eye on them without having to physically pull cards every week. Start with a week of pre-baiting and, in this case, getting them used to the feed. Then run the survey for two weeks by keeping the feeder stocked and taking pictures every five minutes. Plan on having one camera per 100 acres, which should give you a great snapshot of the deer on your hunting property.

At the end of the day, the best way to go shed antler hunting is to lace up the hunting boots and hit prime spots at the right time of the year. Nothing can safely beat walking through large bedding areas or winter food plots (e.g., standing corn or soybean fields) for finding shed antlers. Walking these areas in search of antlers essentially equals post season scouting. The information like rubs, scrapes, beds, runs, and high traffic in food sources are great indications into where to hunt come next deer season. This is especially true for the late season as most of the sign you are seeing is directly correlated to the last month or so. If you already have some of these spots on your property, you’re in luck. Start with the feeding areas to see what you find. You don’t want to charge into their bedding areas if they haven’t shed antlers yet, information that is available only if you are running trail cameras.

Without knowing and shed hunting early it could push them to bed on a neighboring property before they drop their head gear. And once they’re on a neighbor’s land, the chance of finding their antlers on your hunting property is about the same as your chances of winning the lottery. As far as when to go shed hunting, it’s really different for each deer because individual hormone levels are different. Many factors such as weather, injuries, and stress from a variety of sources can cause an early drop. But you are usually safe to start shed hunting by late February/early March. Technically, however, deer could shed their antlers any time from December through March. 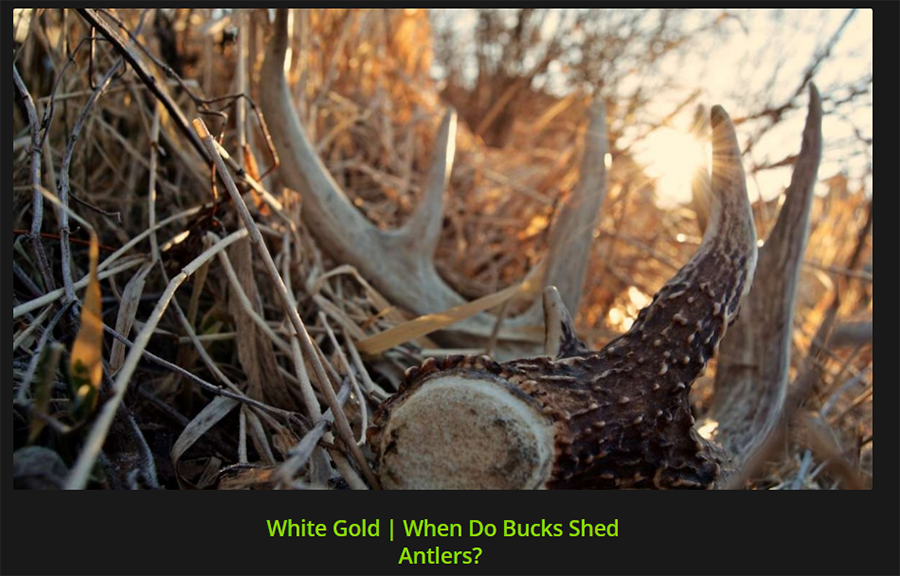 When to Shed Hunt?

If you don’t already have many bedding and feeding areas on your property, think about how you can manage your land to increase these types of habitats for next winter’s shed hunting. For example, could you plant conifers and native warm season grasses or do a few small clear-cuts to increase the amount of thick bedding cover that deer require in the winter? Maybe you could plant your own winter food plot or leave an acre or two of standing crops in an existing agricultural field to feed deer during the winter? If you lease hunting the land, you might be able to convince the landowner of doing one of these things too if you approach it respectfully. For instance, the timber harvested from a hardwood section may help pay for the money lost in not harvesting the crops, but be prepared to help offset the costs yourself if you want to take this route.

As you can see, there are ways to find lots of shed antlers without the risks of using a deer antler trap this winter. Do antler traps work? Of course, they can, but for reasons beyond the trap itself. There are better and more informative options to find sheds while protecting those mature bucks you’d like to see again next fall from a tree stand instead of finding one dead on your property this summer!